Anyone who develops their own chocolate products knows the problem:
You often receive one or more individual prototypes for moulding tests, in order to test the design.
But if you want to produce multiple chocolate castings, or even a small test series, it becomes a real test of patience. They are also often difficult to handle.
We currently offer the BLUEFLEX® CARRIER in the size 380mm x 295mm, in order to house multiple individual prototypes in one frame and so cast them at the same time.

But as well as the BLUEFLEX® CARRIER, we now offer a new frame, in the standard mould size of 275mm x 175mm. This new frame too also makes it possible to simultaneously produce multiple individual prototypes.

To achieve this, suitable recesses are milled into the neutral frame design, into which the individual prototypes are then welded. This mould is virtually as stable as a complete chocolate mould, and its size enables the usual manual or machine handling.

This system is ideal for smaller test series in the development stage or development lab, but also for very small series, in particular for products such as filled chocolates or chocolate bars.

The frame is also suitable for other applications:
With its smooth, neutral top surface, the frame can be used for open metering of chocolate, such as for example using the one-shot procedure. You can also use the frame as a container for collecting chocolate remnants from dosing systems. To do so, when emptying the dosing system, simply lay the container on its smooth side and position it beneath the dosing nozzles.

The UR-0116 universal frame is therefore flexible to use, and perfect for many applications for which there has until now not been an economical solution.

3. Finished mould made of universal frame and 5 individual prototypes 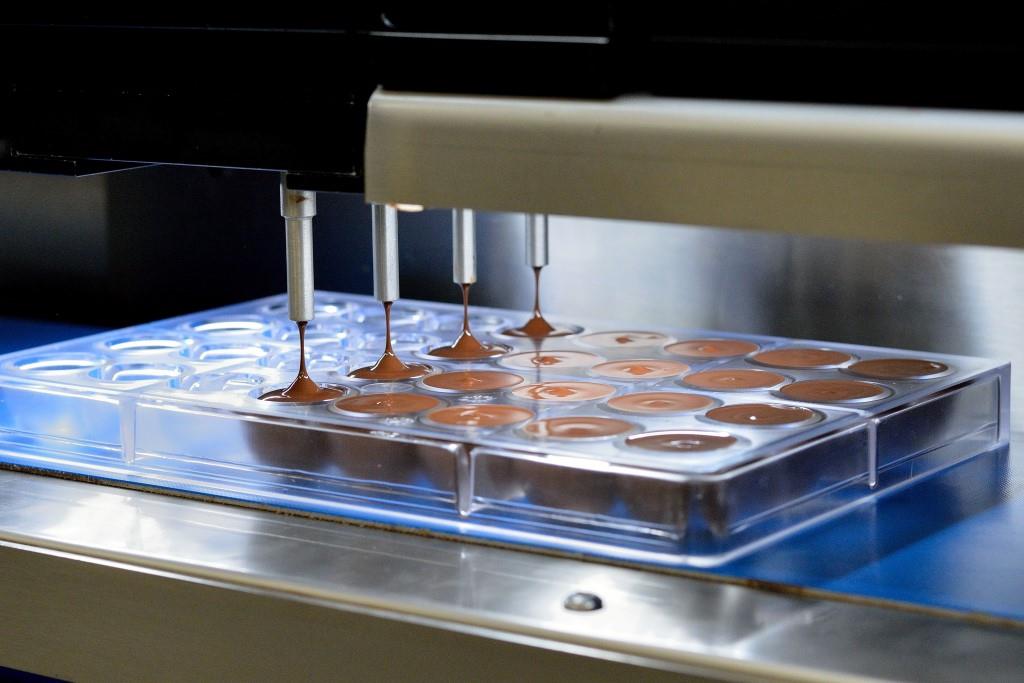 CHOCIVIDUAL is a way to provide customised moulds using a combination of our design development capabilities and the thermopressing technology we use for prototyping and the ... By using a unique technology of a technical partner we can apply holographic structures on chocolate.
Have a look it is really extraordinary! Centering pins made of stainless steel are an alternative solution to pins made in plastic. What are the advantages of this innovation? Read here! The Fipan fair is taking place in Brazil from 19.07. - 22.07.22. We are looking forward to participating together with our Brazilian colleagues! Free tickets for the fair are ... Cooperation with Brunner do Brasil

Our subsidiary BRUNNER DO BRASIL has been in existence for more than two years now. Since the early years coincided with the pandemic, getting started was very challenging. Since ... Brunner moulds close to you

Have you ever been annoyed by the fact that delivery times are so long and freight costs so high? Of course, this is especially true for customers in non-European countries. ... Aeschbach is celebrating its 50th anniversary this year. We would like to offer our sincere congratulations and are delighted that Jürg Rogenmoser, the Managing Director of ... Community stand at the GulFood Classic

Gulfood took place from 13 - 17 February in Dubai. BRUNNER was there with two of our representatives on the stand of our new sales partner Aramtec. Here you can read what benefits ...

Please make a selection to continue. Cookies that are technically necessary for the provision of this website are set automatically. Third-party cookies that help us offer you an optimal service, such as YouTube and Google Analytics, are only activated if you click on "Allow all cookies". You can find out more about this (including the possibility to revoke the declaration of consent) in our data protection declaration.

Hit enter to search or ESC to close

Menu
You are using an outdated browser. The website may not be displayed correctly. Close