The cooperation with our Brazilian subsidiary BRUNNER DO BRASIL is now gaining momentum.
The planned market entry unfortunately coincided with the beginning of the pandemic, and for this reason our activities in the first two years were fairly restrained.
However, we have since expanded our team as planned.  We regularly receive enquiries from Brazil and other South American countries, and some major contracts have already been carried out in the region.
We used the initially quiet phase to further equip our toolmaking facility in Brazil, with our mould and tool developers in Brazil and Germany working in close cooperation.
For example, new articles are developed in Brazil together with the customer.  The associated prototypes (individual samples) can be produced directly in Brazil from PET materials.  At the customer's request, however, polycarbonate prototypes can also be supplied from Germany in thermopress and injection moulding processes.  In other words, the customer has the choice.

For injection moulds the basic tools have been delivered to Brazil.

This means that moulds up to 650 mm in length can be produced there as planned using high-quality mould equipment. 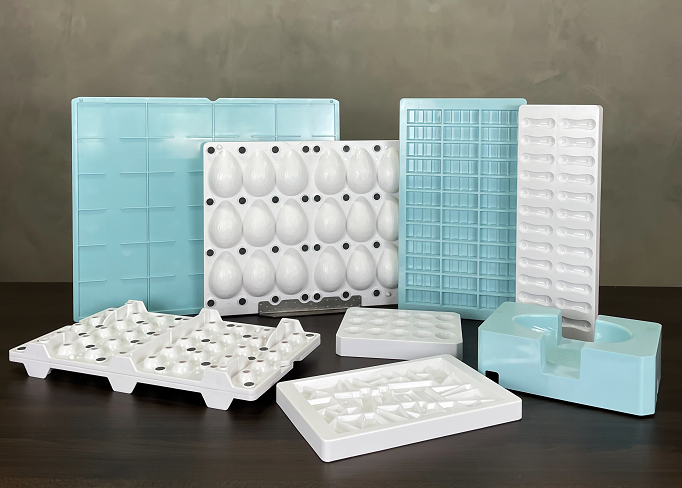 Each enquiry from South America is analysed in terms of its technical and commercial aspects, after which the relevant process is determined or agreed with the customer.
We prefer to manufacture in Brazil in order to save on logistics and customs costs.

At the Fipan trade fair in Sao Paulo from 19 - 22 July 2022 there will be an opportunity to meet the team and discuss the advantages of supplying from Brazil in detail. In addition, our project managers here in Germany or in Brazil will be happy to deal with any enquiries.

CHOCIVIDUAL is a way to provide customised moulds using a combination of our design development capabilities and the thermopressing technology we use for prototyping and the manufacturing of some types of moulds.
With this concept the visions of your individually shaped chocolate can be realised for reasonable prices and a perfect look

By using a unique technology of a technical partner we can apply holographic structures on chocolate.
Have a look it is really extraordinary!

Centering pins made of stainless steel are an alternative solution to pins made in plastic. What are the advantages of this innovation? Read here!

The Fipan fair is taking place in Brazil from 19.07. - 22.07.22. We are looking forward to participating together with our Brazilian colleagues! Free tickets for the fair are available for the first 20 persons who send an email to sales@hansbrunner.de with the subject line: "Free tickets Fipan 2022"! More information about the programme can be found here.

Cooperation with Brunner do Brasil

Our subsidiary BRUNNER DO BRASIL has been in existence for more than two years now. Since the early years coincided with the pandemic, getting started was very challenging. Since then, however, there have been a large number of joint projects and the cooperation between specialist departments from both countries is also working extremely well. Read more about the benefits of the cooperation.

Brunner moulds close to you

Have you ever been annoyed by the fact that delivery times are so long and freight costs so high? Of course, this is especially true for customers in non-European countries. BRUNNER intends to tackle this problem with a new project.

Aeschbach is celebrating its 50th anniversary this year. We would like to offer our sincere congratulations and are delighted that Jürg Rogenmoser, the Managing Director of Aeschbach Chocolatier, agreed to be interviewed by BRUNNER.

Here you can watch the Interview of Jürgen Rogenmoser:

Community stand at the GulFood Classic

Gulfood took place from 13 - 17 February in Dubai. BRUNNER was there with two of our representatives on the stand of our new sales partner Aramtec. Here you can read what benefits this brings, especially for customers in the United Arab Emirates.

Select an option to continue

This text can be edit in the frontend module "1 Themesetting: Cookiebar" .Text, labels and radio buttons can be customized in the file mod_cookiebar.html5. Further information about which cookies are used in the theme Eclipse can be found in the Eclipse manual.